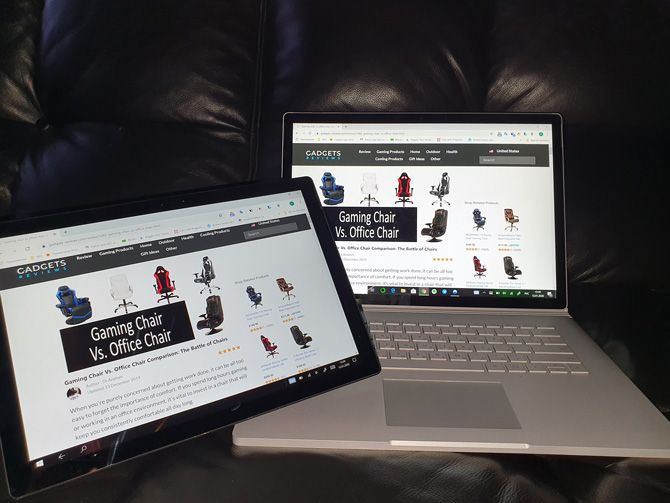 Author : Dr.Anatom
Updated 14 January 2020
Thank You for rating this article.

Microsoft Surface Pro and Surface Book are the two most interesting lines of devices of the Redmond giant. I use both the Surface Pro 6 and the Surface Book 2, which might appear to some as superfluous. The thing is that each of these devices has its own unique features and capabilities, with which they not only excellently complement each other but also beat the competitors in every possible way. Yes, and the same applies to much-lauded iPad Pro and MacBook. Do not believe me? I will prove it to you now.

What You Will Learn from This Guide:

Technically, the Surface Pro 6 is a tablet, albeit quite bulky as it comes with a large 12,3-inch screen and a weight of 770 grams. In practical terms, it is also a compact yet full-fledged laptop with a detachable keyboard. And this is where the Pro series is at its best. As a result, you get a kind of Swiss knife, a tool for any task that can not only replace both a tablet and a laptop but, more importantly, does it pretty well.

Remember when netbooks used to be popular? Those little, lightweight 10-inch laptops, which have died out about ten years ago, being killed by all the same tablets?

So, the Surface Pro with an attached keyboard just turns into such a convenient, compact, and lightweight laptop, while being thinner and much more powerful. In this mode, you will comfortably work with tables and texts (the keyboard coated in Alcantara is just a firecracker!), and play games as well, but we will get to that later.

Detach the keyboard and you get a large tablet, which is needed not so much for creating content as for consuming it. A foldable built-in kickstand is, by the way, an incredibly convenient thing. It’s beyond me to understand how adherents of iPad Pro do without it.

I use Microsoft Surface Pro 6, first of all, for work. This includes texts, spreadsheets, diagrams, messengers, Skype conferences, data analysis in Python, viewing lectures, reading books (both in the text formats and .pdf). The tablet does all of the above-mentioned functions, if not perfectly, then at least gets a solid “B”. Why only a “B” grade? This is because if you want an “excellent” grade, you will need a hardcore machine for business Surface Book2 (I will elaborate on its capabilities below).

The coolest thing about this device is that it allows you to have fun. Obviously, the main entertainment here is surfing the Internet, books, and movies. That said, a large bright screen with a resolution of 2736 x 1824 pixels and unexpectedly decent built-in sound capabilities invite exactly to the latter.

But when it comes to most modern 3D games, this machine, of course, does not fit well enough. And yet, the 10th generation Intel processor with integrated UHD Graphics 620 can effortlessly handle indie hits like The Banner Saga or The Darkest Dungeon. No longer new but still invigorating things like XCOM: Enemy Within or Fallout 3 also work beautifully. Besides, this guy can even handle modern games with not-so-demanding image requirements: let’s say, Fortnite is pretty playable here on average settings.

I short, I always have something to play while on the go or at a hotel, and I hope you have, too. That said, a wide selection of titles is largely due not only to hardware, which is pretty decent by tablet standards, but also to full-fledged Windows 10.

The operating system is the main difference between Microsoft Surface Pro and most competitors. Previously, I used multiple tablets that worked on Android and iOS, so I can say with certainty that in terms of functionality, mobile operating systems of desktop Windows 10 are no match for it.

OS both from Google and Apple are not designed for hardcore games or hardcore work. They were created for fast content consumption almost on the run, Youtube videos, and casual clickers. It does not contain the majority of demanding games, and the same applies to software for work. A tablet running on Android or iOS is good for watching a movie in the bed or quickly make some changes to a document, but no more than that. That’s the kind of philosophy these operational systems have, and that is that.

In its turn, Windows — however much it was badmouthed — in recent years has become a truly universal platform that stays itself, be it a gaming desktop or an 8-inch tablet.

The most important thing is that the set of games and applications on all devices is the same and the means of interaction with them are basically the same. Thus, with the Surface Pro, we get decent Photoshop rather than the family of ugly twins Fix, Mix, Sketch, and Express. A decent World of Tanks, not the clipped Blitz. Decent office software suites, programming environment, compilers, audio and video editors.

Can’t competitors do it that well? Indeed, that is the way it is.

Take, for example, the Galaxy Tab line from Samsung. These are powerful and stylish devices from a famous brand, basically, they are the flagships of all Android tablets. They are positioned as professional tools and even come with a stylus in the kit by default, but they are not suitable for tasks associated with data analysis and almost any other kind of work. There is simply nothing to analyze this data with. The only ones who can be interested in the Galaxy Tab as working machines are designers.

Apple tablets are even worse. This is because they have not been created for work. The only possible exception is the iPad Pro line. But they are suitable only for the designer, while the developer or data analyst would not benefit from using them.

So it looks like that it is incorrect to compare the Surface Pro with its key competitor the iPad Pro.

For basically the same money (although the Surface is even a bit less expensive) in one case, we get a powerful machine for work while in the second case, we get a toy at a price of a second-hand branded car. Perhaps, designers won’t agree with me. But the thing is that I am not a designer. For me, it is not a matter of choice.

Of course, they do exist, it’s nothing special.

— As I have mentioned before, I own the Surface Pro 6 of 2018. But that version did not come with USB Type-C port yet. This was fixed in the 7th version but left a bad taste in my mouth. You are not fast enough, Microsoft!

— Another problem with the Surface Pro 6 lies in its original battery charger, which is not convenient enough. Fortunately, the introduction of USB Type-C in the 2019 version has solved this problem as well: now, the tablet is charged via a USB port. At last.

— Stylus and keyboard are not included in the kit. Without these peripherals, the tablet loses most of the functionality and you have to buy them separately, considering it costs a hefty sum. The good part is that accessories from old models are suitable for recent versions of the Surface Pro. Alternatively, you can simply buy an off-brand keyboard via Amazon, eBay or AliExpress — you have a myriad of options.

To date, the 7th generation of Surface Pro is the most up-to-date version. However, the updated model does not come with any essential innovations, except for the notorious USB Type-C port. Therefore, if you are on a budget, feel free to buy the Surface Pro 6 — you will not lose in performance while saving several hundreds of dollars.

While the Surface Pro is a tablet with an attachable keyboard, the Surface Book is, on the contrary, a laptop with a detachable display. The point is the same, but the former puts mobility first, whereas the latter focuses on capacity.

The Surface Book 2 is available in two basic modifications: with a 13.5-inch screen and a 15-inch one. Both options are powerful laptop transformers with a cool design and the ability to detach the screen so that you could get a tablet of considerable dimensions.

By the way, this feature is unique and there is not anything like that on the market. Transformers from other manufacturers are foldable, but even as a tablet, they remain dependent on their keyboards. A pathetic sight, I can tell you after one year with the Surface Book 2. And yes, MacBook cannot do that either. Weaklings.

Another distinctive feature of this beautiful thing from most competitors is a discrete graphics card, which Microsoft engineers managed to push into the case, thin like that of an ultrabook. That said, my 15-inch model is equipped not with a sort of a weight saver but a full-fledged gaming GeForce GTX 1060 from NVIDIA with 6 gigabytes of high-speed GDDR5 video memory.

What does this mean in practice? First of all, this means that with Surface Book 2, you can get the most of the programs for video processing and machine learning. Not interested?

So what about the ability to play any (I stress, any!) modern games on high graphics settings at least within the next couple of years. Of course, this involves a FullHD resolution. But let’s be honest, 3240 x 2160 pixels are too much for a 15-inch screen.

Apart from the screen dimensions and much higher performance, the Surface Book 2 differs from its competitors by having the same advantages as the Surface Pro 6 has, which I have mentioned above. In short, this is the functionality of a full-fledged PC placed in the tablet case. And this is incredibly cool.

The only downside of Surface Book 2 is the price

The main, if not the only, downside of the Surface Book 2 is the price. You will need to pay $3,300 for a 15-inch version with 16 gigabytes of RAM, an Intel Core i7 processor, a discrete graphics card, and 1-terabyte permanent storage. And it is not just about the USA, in other countries, it is even more expensive.

You can save money if you get a model with a 256-gigabyte drive. It will cost you about $1700 — approximately half the price. And if you need extra space, you can put a memory card.

There are models on the market that come only with integrated graphics: they are cheaper but in terms of price-performance ratio, they are significantly inferior to a version equipped with GTX 1060. Therefore, I would not consider buying them.

That said, comparable devices from competitive brands are not less pricey while having much fewer capabilities. Just do not purchase the Surface Book 2 as a machine specifically for games, since dedicated gaming laptops offer more capacity for the same price.

As always, it all comes down to two points: your needs and money.

The Surface Pro 7 is significantly less expensive than the Surface Book 2, so if you are not going to edit video, do machine learning and type megabytes of text, the ideal option for you is the Surface Pro.

But if your plans include big data processing, machine learning, video games, work with graphics, if you are looking for a larger screen or just a cool gadget with a more fashionable design, your choice is the Surface Book 2.