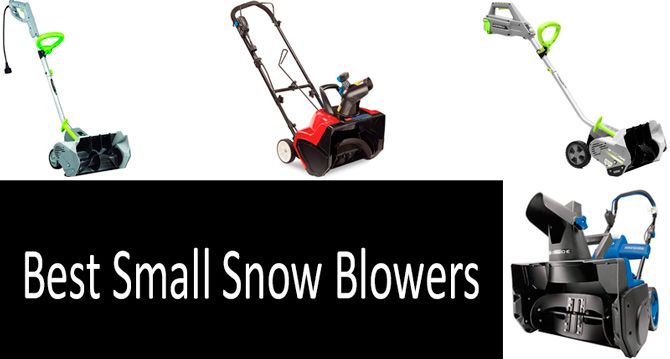 What is the best small snow blower? If you are looking for a small snow blower, then you definitely need a lightweight, portable yet powerful enough model. When choosing from single-stage and dual-stage models, opt for the former ones as the latter ones are more heavy-duty and complicated. The dual-stage snow blowers are better for clearing snow from large areas and on slopes. For sidewalks and small driveways, the single-stage machine is exactly what you need. The next thing to consider is the power source. Choose a cordless unit for smaller areas as it is more maneuverable and easier to operate. And finally, take a look at a clearing width. Small snow blowers have a clearing width of fewer than 20 inches, something that makes them more portable and lightweight. But keep in mind that the smaller the clearing width is, the smaller amount of snow the machine can handle at a time. We believe that the Snow Joe iON18SB-HYB Snow Blower meets these criteria best.

Why have we chosen it? This is one of the most powerful small-sized snow blowers on the market. Being a hybrid model, the machine can move up to 500 pounds of snow per minute. Thanks to its push-mower design, the unit is easy to operate compared to the shovel models. The weight is not put on your back and the device is pretty maneuverable. This is a cordless model with the battery lasting for up to 50 minutes. The machine has a sturdy and durable construction. It boasts one of the highest plowing capacities per minute among this type of snow blowers. The built-in light makes it easier to use the machine in the dark.
$ BUY NOW

What Types Of Small Snow Blowers Are There?

Cordless models rely on detachable batteries and can last anywhere from 15 to 45 minutes on a single charge depending on the texture of the snow (dry vs. wet), the amount of snow, and a few other factors.

Corded models have a small electrical cord that is usually a foot or two long that would be plugged into a large extension cord; this is usually plugged into an outlet that is in your garage or is on the outside of the house.

Corded models can be useful if you have a larger driveway/walkway or you live in an area where wet.large amounts of snow is more common than dry/small amounts of snow.

Cordless models can be useful if you do not have access to an electrical cord or you have other tools (weed wacker, drill, etc.) that use the same battery; it is becoming more common recently.

What Are The Advantages And Disadvantages of Different Types of Snow Blowers?

Smaller snow blowers are generally much more affordable than larger ones, and they can be quicker if they have a decent amount of power or are used by someone quicker/stronger.

Larger ones, even the push models, do require more strength to use though, and they tend to be over 300 or 400 dollars (and that is low-balling it). Still, they can be much more convenient for larger driveways and/or parking lots.

Push models can be slower, depending on their weight and power, but they can also relieve and prevent the back pain that shovel models are known to cause.

Shovel models can be quicker (again, depending on the power) and easier to use in smaller spaces/sidewalks, but they can also cause you back to ache and become sore pretty quickly, even these powered ones.

Below, you will find a review of the six best small snow blowers at a price ranging from $70 to $240. Each model has its own advantages. Some small snow blowers have large wheels, built-in light, chute control or long run time while others come as hybrids and have a high capacity per minute.

The first on the list, this is one of the most popular models since it can move one of the most amounts of snow per minute, 300 pounds, for its type, and that is just the smaller 16-inch size. The shovel also comes in an 18-inch and 22-inch size, and all of them come in corded or cordless models.

It does have a decent throwing distance, up to 30 feet, and can last anywhere from 25 to 40 minutes depending on how heavy/wet the snow is; the cordless model. It can also come with an optional 3-year extended warranty that covers the shovel and its parts.

However, this is one of the heaviest models on this list, but the push-mower design makes it easier to use compared to the shovel models; the weight is not being put on your back. The battery can also last for up to 50 minutes.

This is another shovel design, but one of the most noticeable differences is that it is available in a cordless model as well as a hybrid model that can be used with a battery or a chord.

It does have less throwing distance than some of the other models, 25 feet, but if you have back problems, you may want to take another look at this one; it only weighs 14.5 pounds. It also comes with a full 2-year warranty, and there is also an optional 3-year extended protection plan for the shovel and its parts.

This is one of the most powerful models out on this list, being able to move up to 700 pounds of snow per minute. Between that and the 30-foot throw distance that this has, this may be the model for you if you live in an area where it snows often or in larger amounts.

It is also one of the more customization models, too, since its chute can be adjusted with both a zip deflector or a quick control, which can be great for a sudden gust that throws your snow back at you or your working path. This model also comes with an optional 2 or 3-year protection plan that covers the blower and its parts.

This is another cordless shovel model, but it does have a more unique design; it's smaller where the blades are yet taller behind and above them. If you live in an apartment, this may be the best option for you since it is one of the quietest models out there.

The battery also does not last that long, and the throwing distance can only get up to 20 feet, making it less effective for larger driveways and/or walking paths.

This is a corded shovel model, but it is available in cordless models for the 16-inch, 18-inch, and 22-inch sizes that it comes in as well. It is one of the more powerful corded models, being able to move up to 430 pounds of snow per minute.

Teller amounts of snow may take longer, though, since the clearing depth is only 8 inches; meaning it may take twice as long to clear out a snowfall that resulted in 9+ inches. It can also come with an extended warranty that covers the blower and its parts for up to 4 years.