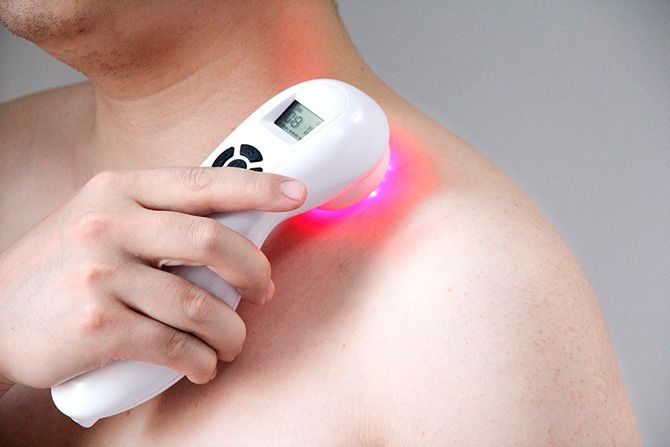 What is the best cold laser therapy device? Unlike surgical laser, this therapy uses low levels of light, which is why it does not heat your skin and tissues. And this is where the name “cold laser therapy” came from. It offers numerous benefits and can be used for healing minor injuries, rejuvenating your skin, relieving pain and muscle spasms. The cold laser therapy works by increasing cellular metabolism and rebuilding damaged cells. When selecting your cold laser therapy device, choose an item that emits wavelengths of no less than 650 nanometers. A portable and lightweight option is more convenient in use, while a long-lasting battery will allow you to use the device on the go.

HD-MAX Cold Laser Therapy Device is a bright example of such equipment. What I like about this product is a professional approach to the treatment as you get a full kit of items necessary for efficient therapy. Apart from the machine itself, it includes two chargers, safety goggles, manual, e-book, and a carrying case. The device uses two kinds of wavelengths — those of 650 and 808 nanometers. With a weight of less than 2 pounds, it is easy to operate and carry, so you can easily take it with you on the trip. The battery lasts for four hours, which is enough for several treatments.

This therapy applies low-power lasers or LEDs to the skin. Unlike the high-level lasers used in surgery, these cannot cut body tissues and have only a therapeutic effect. In particular, it can boosts cell activity, mitigate pain, and stimulate healing. Low-level laser therapy (LLLT), also referred to as cold laser therapy, uses light that does not even heat your skin. During the procedure, which is noiseless and takes just several minutes, you will not experience any pain, nor will you feel a vibration.

How does it work? Various wavelengths of low-power light are applied to the skin and absorbed by the body. The cells respond to this stimulation, promoting healing of damaged tissues. Normally, these wavelengths range from 600 nm to 700 nm. However, some machines apply wavelengths of as much as 950 nm, which allows the light to penetrate deeper into the body tissue.

Some manufacturers of LLLT devices claim that the therapy is good for almost all health conditions. Do not fall for it. Keep in mind that low-laser therapy can have only a modest effect and is not a magic wand. So let’s take a look at the available scientific evidence of LLLT effectiveness.

A group of researchers from the USA, Australia, and the UK has conducted research aiming to find out whether low-laser therapy is an effective safe technique for pain management. The scientists have concluded that LLLT does help relieve pain accelerates healing in the body. One of the major advantages is that this technique has almost no side effects and is safer in comparison with more traditional methods, such as anti-inflammatory drugs and steroid injections. That said, its efficacy should not be overstated. Low-level laser therapy does not cure diseases but only mitigates some of their symptoms.

Another study highlights the importance of choosing the right wavelength, timing, pulse, and power density. If the dosage is wrong for a particular treatment, the effectiveness can be lower or the treatment can even produce a negative result. The authors of the study believe that that was the reason why some researchers obtained negative results. They say that LLLT can be used for pain management, joint disorders treatment, wound healing, inflammation relief, and tissue repair. It is worth noting that there is more scientific evidence supporting LLLT efficiency in alleviating pain than in wound healing.

The researchers also claim that the therapy can also be beneficial for severe diseases, such as stroke or brain injury. Animal tests show that the therapy can reduce the damaged area in the brain following a three-day treatment using 665 nm and 810 nm wavelengths. Another successful application of low-laser treatment is hair growth stimulation. This has been especially promoted by manufacturers making helmets, combs, and other electric devices with the use of this technology. Law-laser therapy works by causing hair follicles to move from telogen into anagen phase, with the new hair being denser and thicker. This was confirmed by a 6-month trial involving 110 participants.

Who Uses Low-Level Laser Therapy: Indications for Use

Since low-laser therapy is safe and risk-free, it has many applications for use. Here are the most common ones.

While LLLT is generally considered safe for use, there are still some contraindications. First of all, it should not be applied to cancer patients. While the therapy is used to mitigate the side effects of oncological treatments, it can pose a risk to cancer patients. Since LLLT can stimulate cellular processes, it may contribute to tumor growth. People with epilepsy, blood diseases, and exposure of the retina should also avoid low-laser therapy. Nor should pregnant women be exposed to LLLT, which is because the therapy’s effect on unborn children has not been studied well enough. Apart from that, experts do not recommend applying the treatment to people with infectious diseases.

When was low-level laser therapy invented?
LLLT was discovered in 1967 by a Hungarian scientist Endre Mester. It was the first time that cold laser was used in medicine. The treated mice showed better hair growth and wound healing, which led him to the conclusion that the low-level laser could have beneficial effects.

Where to get low-level laser therapy?
This therapy is offered by many clinics, however, you can receive your treatment at home. Today, portable LLLT devices are becoming increasingly popular as a less time-consuming and cheaper alternative to attending a clinic for treatment. Moreover, since there is a variety of LLLT products on the market, you can choose between professional-grade machines and unsophisticated devices.

Does low-level laser therapy work for hair loss?
Yes, LLLT encourages hair growth and there is scientific evidence supporting this claim. According to a study conducted by a researcher in New York, the trial participants had a 40-percent increase in hair growth following the four-month treatment.

Is low-level laser therapy safe
Yes, it is a safe non-invasive method that is considered a promising alternative to drugs and surgery.

0 #1 HD-MAX — Klaus Pfeiffer 2019-11-29 12:58
Does this HD-MAX Device come with Charger for european use = 220 Voltage?
Refresh comments list
Cookies make it easier for us to provide you with our services. With the usage of our services you permit us to use cookies.
Ok