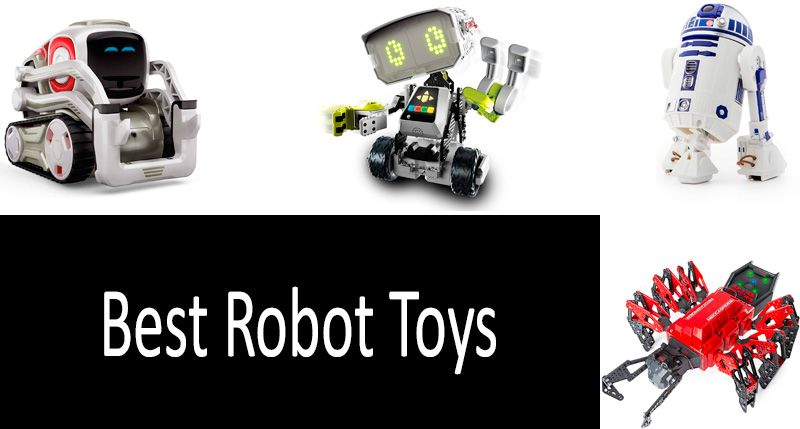 15 Best Robot toys on the market in 2020: Comparison Table

Author : Wiki
Updated 16 December 2019
Thank You for rating this article.

What is the best robot toy? Robots are ones of the most popular movie characters among children, so no wonder that robot toys are in demand. Still, it is not that easy to select the one that will suit your kid’s needs. To begin with, there are two main types of robot toys — programmable and non-programmable.

The former ones are programmed using specific codes, with some models being capable of moving autonomously. Just look at this programmable Meccano-Erector M.A.X Robotic Interactive Toy with artificial intelligence. It is equipped with infrared sensors allowing the toy to move around flat surfaces and overcome obstacles.

The non-programmable models are guided by an external device or activated by voice. It is noteworthy that some programmable models may also have the remote control. A good example is the R2-D2 App-Enabled Droid. It does not have a remote control device by is guided remotely via an application that needs to be downloaded to your smartphone. In our assessment, robot toys with remote regulation are preferable for kids as they involve more human participation and, therefore, your kid will not lose interest in playing with such a toy.

When shopping for a robot toy, consider what type of skills it requires to make sure that your kid will cope with the task. Also, keep in mind that some models come pre-assembled while others need to be constructed. And finally, in case your kid is going to play with a robot toy outdoors, you should choose a waterproof model.

Vector Home Robot by Anki | Hangs Out & Helps Out

Powered by AI and advanced voice-activated robotics, the Vector Robot is meant to be a helpful friend. Unlike other robots, he's rich with personality and can be engaged through touch, sound, and sight.

Purely by voice, you can ask Vector to take pictures, time dinner, display the weather, and much more. When paired with Alexa, Vector can do even more: dim the lights, raise the volume, or even control the thermostat.

With a capacitive touch sensor and ultra-wide HD camera for sensing motion, the Vector has a uniquely high degree of perceptiveness.

Although Vector is not necessarily a teaching tool, children can spend hours learning about the intellectual and perceptive limits of the Vector robot. Curious minds can ask any number of questions, not limited to science, math, reading, or history. Vector draws on a huge knowledge base that makes him a wonderful companion.

Similar to the Vector, the Anki Cozmo is a friendly robot that can interact with you in a variety of ways. Featuring an intuitive user interface, the Cozmo is primarily meant to be an educational bot for both kids and adults.

You simply need a compatible iOS or Android device to get started. Thanks to recent advancements in AI, Cozmo is able to recognize you, remember your name, and express dozens of distinct emotions. The more you interact, the more personalized the Cozmo becomes.

Even more interestingly, Cozmo features an Explorer mode that allows you to guide him, prompt him to greet people, and lift small cubes. For kids, Cozmo is a great addition to the family because he's built with tons of interactive puzzle, memory, and math games.

Both advanced users and kids can code with Cozmo, learning new ways to express ideas through programming the robot to do new things. In beginner mode, kids can snap together code blocks to change Cozmo's functionality. Intermediate programmers can create even more complex projects, games, and display changes through a Sandbox coding platform.

Meant for kids age eight to twelve, the Ciro Solar Bot comes with over one hundred pieces that can be built into twelve distinct types of robots. The whole kit includes plates, gears, tires, and shafts that can be easily disassembled to create an entirely new robot.

Simply by following a step by step manual, kids can learn how to construct intelligent robots through play. More advanced builders can even create their own unique design. Once the robot's completed, it doesn't require batteries - the bot simply needs some sunlight to crawl, roll, and swim through water.

Aside from making a great parent and child project, the Ciro Solar bot encourages children to get comfortable with science and technology. Kids can learn about how the principle of mechanical transmission works and are guided through basic robot design tenets. Moreover, children start to build positive associations with problem solving through designing new robots.

Within fifteen minutes, it's easy and fun to build the Makeblock mBot. Featuring line follow, obstacle avoidance, and voice recognition software, the mBot is a robust little bot that can be controlled by either remote or smartphone.

Makeblock, which is one of the leading companies in kids' STEM education around the world, designed the mBot to train young thinkers in logical thinking. Kids can use the intermediate mBlock software on any major operating system to code the robot with new functionality. Now, almost half a million users have tried out the platform.

All in all, the mBot is a fantastic robotic toy for new programmers.

Designed for ages ten and up, the MeccaSpider is a complex yet very rewarding robot building project. Both parents and kids can explore the challenge of creating their very own spider companion in just one to three hours.

Once the spider is built, kids are able to develop skills in science through programming it to do new things. With fun options like guard mode, attack, and tons of different games, the customizable robot spider toy will always keep you guessing.

The whole kit includes over two hundred parts, including decal sheets, sensors, a brain module, and motor modules. Kids can gain an in-depth understanding of the principles that underlie technical design and electronics.

Right out of the box, Novie is ready to play with its new owners. With over twelve different learnable tricks and seventy-five programmed options, the Novie is a highly responsive bot that kids can grow to love.

Kids can control the Novie using hand gestures, encouraging him to spin out, wheelie, wacko walk, and much more. With practice, the Novie gets better at completing tasks and becomes more responsive over time.

The Novie makes nearly a hundred different sounds, features three motors, and can recognize fourteen different hand gestures. Interestingly, different Novies can see and interact with each other.

Overall, the Novie is great bot for younger kids aged four and up. Although he can't be programmed with new functionality, the Novie is packed full of personality and provides a great entrance into the world of robotics.

Vector Robot by Anki, A Home Robot Who Hangs Out & Helps Out, With Amazon Alexa Built-In
4 Anki