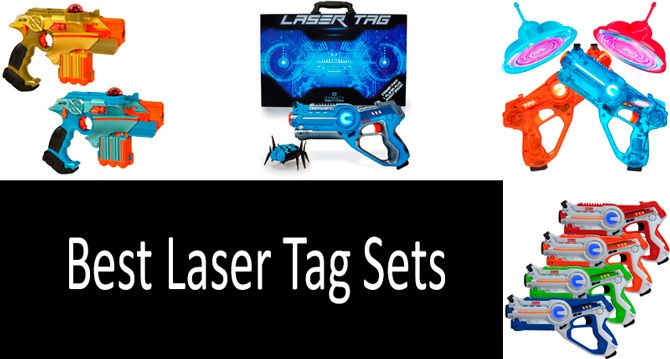 What is the best laser tag set? We recommend you to buy a toy that uses infrared light as it does not require any ammunition and, more importantly, clean-up. With such guns, your game will be continuous and more entertaining as the players will not have to stop to reload. Another thing to consider is material the guns are made from. They should be sturdy enough for outdoor games, even when there are unfavorable weather conditions. Also, take into consideration blaster compatibility, the number of play settings, visual and acoustic effects. And finally, purchase laser tag sets only from trusted and well-established brands. We believe that Nerf Official Multiplayer Laser Tag Game meets these criteria best.

Why have we chosen it? This set of two laser tag guns is made by a trusted toy brand Nerf. The company was established in the 1970s and today is well known for its foam-based weaponry. The blasters are compatible with others, allowing for more than 2 players to take part in the game. They also have several settings, so you can choose between “Solo”, “Team 1”, “Team 2” and “Team 3” options. Depending on your experience level, you can set your blaster for 10 or 25 hits. Each blaster in the set is powered from 6 AA batteries. They use awesome lights, sounds, and vibrations, making your game even more entertaining.
$ 65.04 BUY NOW

What Are the Types of Laser Tag Sets?

Laser tag is a widely popular game and therefore offers a wide variety of nearly customized guns for the game’s participants to enjoy. The offerings of each laser tag set depend greatly on the play style of the one purchasing it.

All games of laser tag depend on scoring by hitting an opposing sensor. The sensor then automatically tallies the number of hits the opposing player has gotten in. Unlike its compatriot game paintball, there are no visual cues indicating the winner of each round of laser tag.

Because of this, laser tag sets vary in the way they allow the game to be scored. Some sets include vests that house the built-in sensors to allow participants to keep score that way, while others score from the opposing player’s gun being hit.

Below, you will find a review of the 5 best laser tag sets at a price ranging from $35 to $70. Some of these guns come with vests, flying targets or a smart bug target. The number of guns in one set varies, with some products offering as many as 4 guns. The set with a smart bug target is a set made with the solo player in mind as it does not require additional players. There are models with multiple modes to choose from, such as pistol, shotgun, machine gun, and rocket.

Produced by industry veterans Nerf, this set includes two laser tag guns. These guns are battery-operated, with each requiring the usage of six AA batteries. This set is the type to include the sensor on the top of the laser tag gun, meaning scores are accomplished by tagging an opposing player’s gun. Including a built-in rumble pack, these guns vibrate as soon as an opposing player has shot them.

The technology on these is such that players cannot fire at any gun pointed toward them. They need to know who is on their team and be aware of who they are shooting at, as friendly fire is enabled with these units. They also include a recoil feature which indicates to the user that their shot has been fired, making the experience a bit more intuitive.

The Kidzlane Infrared Laser Tag Game Mega Pack brings 4 guns to the table in this group laser tag set. Each of these guns has four different modes: pistol, shotgun, machine gun, and rocket. Each separate mode has its pros and cons, coming equipped with differing types and ammo and lives taken per shot. Players able are to switch gun modes mid-game, allowing for intense situations to occur.

These guns also include built-in receivers, meaning players will be firing their shots at the opposing players’ guns. Players are able to be sorted into teams: green, red, blue, or white. These guns register blasts from up to 130 feet away. Players are able to set their life bars and enjoy the sounds and vibration that accompany dynamic gameplay. They are 3.55 pounds each and are recommended for users 8 years and older.

This set offers both 4 guns and 4 vests, meaning the guns’ blasts will be registered by the vests rather than shots to the guns themselves. The sets come with 24 batteries and a screwdriver, ensuring purchasers will be able to begin playing immediately, right out of the box.

These guns and vests also vibrate according to shots fired, meaning both the shooter and one being shot will register when a successful shot lands. These guns are 4.85 pounds and made of a soft plastic recommended for children ages 6 and up.

The brand’s manufacturer, Koon, recommends these as started laser tag sets for children. Light and easy to carry and intuitive to use, parents will likely have more peace of mind with their young children playing with a set like this rather than a laser tag set which is aimed at adults and has fewer safety precautions.

Dynasty Toys has produced this set with the solo player in mind. Coming with one laser tag gun and one intuitive smart bug target, there is no need for additional players to cooperate in order to enjoy this set. Players will be able to practice their aim by attempting to shoot at the electronically run bug, which will move around in an attempt to escape the player’s shots. Once activated, these bugs will crawl around on the floor, flipping over if they are shot.

This gun comes equipped with four different blaster modes to ensure dynamic gameplay. What’s more, this gun is capable of playing group laser tag games. As long as other players bring their own guns, this gun will be able to register shots taken at the gun itself. This gun is 2 pounds and is recommended for children ages 4 and up.

This is a set of two flying targets and two matching guns. These targets act like drones, spinning in the air in order to avoid incoming shots. A set such as this is ideal for players who want to practice their aim or compete to see which player can land the most shots. Equipped with four modes, pistol, shotgun, submachine gun, and rocket launcher, this set allows for versatile playing styles.

The sensors on both the guns and the spinning targets will register shots from up to 130 feet away. The intuitive axis located atop the spinner allows it to refrain from hitting the ceiling. Each gun requires 4 AAA batteries, while the spinners are rechargeable via accompanying USB chargers. These guns weigh less than 1 pound and are recommended by the manufacturer Power Your Fun for children at least 6 months old.

Buyer’s Guide: What to Look for When Buying a Laser Tag Set?

When looking to purchase a laser tag set, one must first look at the weight of the blasters in proportion to the children who will be playing with them. While laser tag guns for adults are typically heavier, children will quickly tire of lugging around heavy, and potentially dangerous, laser tag guns.

Next, users should look at the sensor types and their dynamic options. One should consider if they want shots to the body, registered by a vest, in order to keep score or if shot should be aimed at opposing players’ guns. Each option dynamically changes gameplay.

Lasting, when choosing a set one should look at any accessories that come with the set and their battery life, as well as the battery life of their blasters, in order to ensure the set produces long hours of entertainment.

What Are The Trusted Brands & Manufacturers?

Nerf and Kidzlane are two of the most trusted manufacturers for laser tag sets.

Nerf has been one of the most popular manufacturers of child home entertainment sets for a while, popularizing their own brand of gun, the Nerf Gun, which operates an on basis that is similar to laser tag.

Meanwhile, Kidzlane has produced a number of children’s toys, with their laser tag sets being a close runner up to those of toy manufacturing giant Nerf.

When giving a child a dynamic and physically competitive game set such as laser tag, it is important to maintain safety runs. Ensure your children remain aware of their surroundings and clear away any fragile items when they are playing inside.

Children should know that there is nothing violent about laser tag and should know better than to attempt to do physical harm with their blasters. If the blasters they are using are heavier, they should be careful not to swing them around so as not to hurt themselves or those around them and should be careful not to line any scope mechanisms up too closely with their eyes.

What Do Players Say?

ToyNotes’ Nerf laser tag gun review praises the guns’ range, stating that the guns were able to reach the radius of the entirety of the reviewer’s home, rating the experience utilizing the blasters as an overall positive and enjoyable experience.

Praising the accuracy and the versatility of the indoor/outdoor play and team customization, the channel was positive overall. Negative notes include the high amount of batteries necessary to keep the blasters running consistently.

Citing the lights as both intuitive and fun for children, the reviewer is also impressed by the gun’s ability to sync up different guns to the same team. This reviewer also notes that this team mode exempts friendly fire, making it easier for children to play without having to worry about where their shots will land. The reviewer also cites the gun’s dynamic range.

Laser tag isn’t a new idea either, though, for home use, it has rarely been successfully implemented in the past. The core concept is that either teams or individual players will wear sensors on their arms, legs, torso, and possibly head. These sensors are photoreceptors, which specific frequencies of the low-energy laser can set off, indicating a hit from a gun.

The general idea is to either eliminate the other team or to be the last man standing. This is very similar to the concept of paintball, or various forms of Nerf gun tag employed by youths and teens, and even adults. The advantage to laser tag over anything using an actual projectile is the literal impossibility of damaging property or injuring anyone. While these lasers are not good to shine directly in someone’s eye, they can’t actually blind someone, and they lack enough energy to do damage to the skin or any other material. They’re about as powerful as the scanning laser for barcodes, just to give a general idea.

Laser tag sets do not work well in brightly lit areas, and you will have to pay a decent price for a set that actually works decently. Cheap laser tag sets will rarely work properly, mostly due to the lack of tuning with the laser and the photoreceptors. This is a healthy, harmless way to burn off pent-up energy and aggression just as a game of Nerf tag or paintball can be.