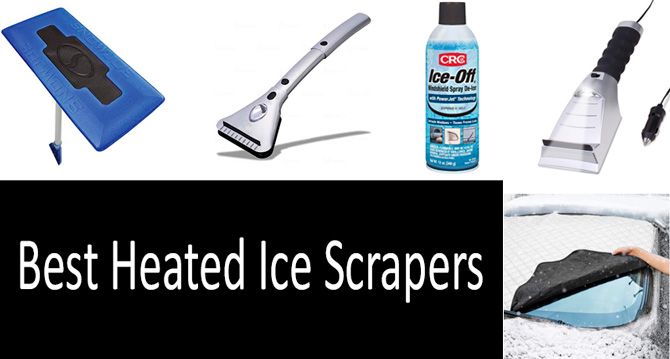 What is the best heated ice scraper? It should be plugged into the power outlet and be able to reach any area of your vehicle. Another essential thing is weight. Look for a lightweight option so that your arm could not get tired while cleaning ice from your car. Then, consider models with extra features, such as and an ergonomic handle and flashlight. These features will make the device more comfortable and easier to use. There are also models with a sleek design, which is also important as in winters, you will use this device frequently and will more likely do it in public. Moreover, you can give such an ice scraper as a gift to anyone who owns a car. We believe that Heated Snow Ice Scraper for Car meets these criteria best.

Why have we chosen it? It is a very comfortable ice scraper with a long 15-foot cord. Plug it in the cigarette lighter and it will easily reach all the windows of your car. The device comes with built-in LED flashlights allowing you to clean a car even in the dark. With a weight of just 8 ounces, it is easy-to-use and pretty compact. The ergonomic easy-to-grip handle adds to your comfort, especially in cold winters. This product will save you time in the morning, making it an easy task to scrape the ice away from the car windows.
BUY NOW

How Does A Heated Ice Scraper Work?

In the winter months, ice scrapers are widely used in order to remove ice scraped from windshields in order to improve vision conditions while driving and give the driver a clear view of the road.

Some models such as the Heated Snow Ice Scraper for Car are equipped with flashlights that allow their users to see in the dark. This is a useful feature for winter mornings and nights during which the sun is not very visible or present at all. These tools work in tandem in an attempt to make ice scraping a much more streamlined process, improving on an already existing design with more modern technological advances.

These heated ice scrapers are also intuitively designed in order to be able to clear side view windows as well, making them a worthy addition to anyone's emergency car kit. This model plugs into a car's 12-volt socket for easy usage.

Is A Heated Ice Scraper Worth Buying?

While the idea of a heated ice scraper is a good one, this model has some conflicting reviews. Some users report the unit takes a while to heat up and therefore also takes a while to clear the snow off of a windshield. Some users state that the unit actually reaches intense heat and advise potential users to buy heat resistant gloves or mittens in order to handle said scraper model without potentially burning themselves. Users do not need to worry, as the frozen glass will not splinter upon contact with the heated ice scraper.

Some users may not agree that it is convenient to use wired options that work off the cigarette lighter, as the car will have to be turned on and running throughout the scraping process. However, most cars facing these conditions will have to be warmed up regardless, so users will not have to worry about running their cars for no reason. The reach of the cord is such that users will not have to worry about the unit reaching their window, although they may find it inconvenient to string the unit along from the interior of their vehicle to the exterior.

What Are The Alternatives?

Instead of using a heated ice scraper, some drivers may find it more convenient to simply protect their windshield from being snowed on in the first place. This product attaches magnetically to the corners of one’s windshield in order to shield the glass from any potential snowfall.

A device such as this is possibly the most efficient time-saver of them all, as users do not have to worry about spending any time cleaning their windshield at all. Rather, they simply remove the guard and shake off the snow.

However, one may find that one has to use a liberal amount of the product for it to be effective, making the product potentially not cost-effective.

This snow broom essentially works as a large-scale snow scraper. By covering more surface area at one time, the snow broom can work to save users time and arm strength. This model is both extendable and light, helping users reach the expanse of their vehicle easily.

Those looking to remove snow from the tops of their vehicles when they are driving large trucks or vans will likely find a snow broom more efficient than using something such as an ice scraper since the broom will help extend one's reach.

What are Heated Ice Scrapers? Heated ice scrapers are a tool used for removing ice from windshields, windows and other glass surfaces. Like a typical ice scraper, they have a beveled, wedge-shaped “blade” though this blade isn’t particularly sharp, and thus is pretty safe to use.

The heat is provided by a lithium ion battery, or sometimes AAA batteries, providing waste heat through elements in the scraper. The heat makes removing the ice much faster, not so much due to instantly melting it, though if it’s thin enough it may. Its actual power is in loosening the ice’s adherence to the glass by attacking from an angle and severing the crystals while warming the glass slightly.

These work best if your car’s defrost is also turned on, providing heat from both angles, making the ice all the easier to do away with. This is an excellent tool for anyone who lives in an area that gets heavy frosts in the morning.