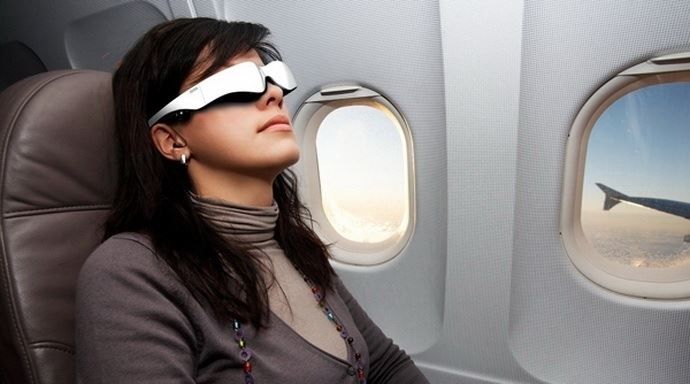 How to choose video glasses: the units’ pros and cons

It’s devilish hard to write something thoughtful about video glasses! It appears as if these devices are quite familiar to us, and the manufacture of such video gadgets is going swimmingly thanks to hi-tech industry giants… But we still lack something!

First, millions of users can hardly distinguish between video glasses, stereo helmets and visors of augmented reality. This terminology confusion turns the discussions in forums into something incomprehensible.

Second, we can’t say that the video glasses are now the part of our routine life. Though many geeks are really keen on such devices, all these technologies are still regarded as something exotic, that is why we lack the information from buyers and users.

To put it shortly: this review is devoted to video glasses only, i.e., a compact gadget intended to watch films at home, in plane or car as well as play modest experimental games. Together we will examine the main parameters of up-to-date holographic lenses, their cons and pros.

WHAT FOR ARE THEY NEEDED?

Before getting acquainted with new technologies in video sphere, you should first determine how you will use the unusual glasses and how much you are ready to spend on them.

To buy ordinary video glasses is not the reason to overpay. In case you are looking for a road-gadget to watch films and look through photos in any private area in plain or train, you may save money and pay minimally. In case you are in search of high quality and 100% video immersing, you have to pay much more.

WHAT DOES THE PRICE OF 3D VIEWERS DEPEND ON?

Let’s examine the price range. Drop in any large on-line market and you will see: today the price of video glasses varies from 75$ to … 3000-4000$ (as a rule, the latter models really possess the home cinema functionality). There are even more expensive models, but their price can’t be regarded as reasonable.

For 75 – 400$ the buyer will get an ordinary variant: spectacles with internal memory, SD card slot and minimal complete set. Light and compact models (Karlton2 50inch model, TBS 3170 and others are among them) can’t be customized at will and you are certain not to get a high quality picture.  Nevertheless, they may be an optimal road gadget for many users. We advise to buy models with AV interface, e.g.  Av-in and WGA.

From 400$ the range burst begins. Here are flat glasses which direct the ready image to the eye retina, more classic small screen glasses, adjustable diopter glasses, and real mini-helmets. Their functionality exceeds greatly that of “road models”.  Among them the following models are especially worth of mentioning:

Some key parameters are common for all models including the cheapest ones, so every potential purchaser should be aware of them. Let’s look closer at them.

The size of virtual screen is very important as it is the screen which you will have before your curious eyes. By the way, do you know that in the majority of models the “picture” is transmitted to each eye separately?

Commonly, the video glasses work with 52, 72, 84 and 98 inch format. However, there are models that make you believe that you watch many meter plasma or even movie screen.  It’s true that you appear to see it from the distance of some meters. It is normal, otherwise you would cast your eye over the whole screen “body”.

We can’t avoid the problem of video screen resolution. The higher the resolution is, the more distinct and smooth the picture is. It is clear, though some producers have already begun to provide their low resolution glasses with image “special” smoothers. The most market models permit 640х480 resolution. It is not very cool, is it? But they have their own purchasers, and even very delighted ones (sometimes you may read their reviews like this “Oh, I simply can’t play at ordinary comp any more after having tried this thing!»)

However, at the moment you may buy video glasses with 1280х720 resolution and even FULLHD format. Among them there are Avegant Glyph, Epson Moverio BT-200 and others. Warning! The price range strikes not less than the picture quality difference.

Both weight and size of such gadgets are very important as well as the ability for off-line operation. First, nobody can ignore the comfort! You can hardly like the gadget which is able to turn you into an old ruin with pain in the neck and the nose bridge rubbed sore for just a couple of hours. Second, energy blocks of some recent models resemble the backpacks of Ghostbusters!

So heavy and big, they will entangle your legs and arms with cables: many video glasses can’t function off-line. Even the expensive model Sony HMZ T3 is tightly connected with a power block. This is a great annoyance!

3. Whom the video glasses don’t suit

Finishing our examination of «main parameters», we can’t conceal that some people can’t use any video glasses. The weak vestibular system and poor vision can make you suffer badly when using this gadget. So, check the video glasses for yourself without fail before purchasing it.  Otherwise you may be greatly disappointed.

HOW TO MATCH THE IDEAL VIDEO GLASSES

Well, everything has become clear about key parameters. Let’s look closely at those aspects which are important when choosing video glasses. They are as follows:

1. The opportunity to change and select diopters, adjust the focus and “the distance to the eye”. It’s clear that not all prospective buyers of video glasses can boast of ideal vision. What to do if you are a myopic or hyperopic film fan? Such models as Vuzix Wrap 920 allow to change diopters. This is very cool! What a nuisance that the focus adjustment for persons with vision disorders is not provided even by such cool gadgets as Sony HMZ-T3. What to say, then, about mass models...

The developers suggest to their clients to wear … ordinary glasses under video glasses. As for us, we are frightened by such practice: for the simple reason that it is so uncomfortable!

2. Image display technique. There is a main trend and … its recent competitor. Most often, the image  is displayed on small screens hung before your eyes.  Such technology is represented, for example, by the glasses of PROBER firm, it being the most reliable and tried. Much depends on the device quality and the opportunity to adjust the distance between “eye-pieces” and eyes.

What concerns such devices as Avegant Glyph, here the image is projected on to the eye retina directly – independently for the left and right eye. As a result, “a very bright and distinct picture” occurs. What troubles us about this novelty most of all is its safety for the buyer’s vision.  Till now no such a device has been sold officially!

By the way, there is still one more exception, a Moverio model. The image sources are placed in glasses’ arms, and the picture itself is projected on to special inserts inside lenses – the transparent glasses may be used while walking.

3. Sound! Here we find difficulty in examining thoroughly. The most of models possess the ordinary jack for headphones and don’t process the sound independently. Still, there are exceptions. Are you a music fan? Do you highly appreciate both visual and sound accompaniment? We know what to offer to you. Thus, Sony T3 glasses may process up to 8 audio channels. Above mentioned Avegant Glyph… are headphones by one half! However, we will represent more detailed information about this device in a separate review.

4. Additional «cool things» are services and functions. Into this column we will note down 3D support and compatibility with particular operating systems, the possibility of picture response to the turn of the head (a rare pleasure) and a multiscreen function.  Some of these points are important only for gamers, and 3D is of no special value, in our opinion. But many buyers pay attention at such “filling” as well. So, we can’t pass it by.

5. Battery. Usually the video glasses of average price category work from 3 to 6 hours without recharging. Exceptions are also known. Thus, Epson Moverio is announcing future models capable to work for 30 hours without recharging!!! Negative exceptions to the rule are represented by the most of “Chinese cheap models”. All of them can hardly endure for 2-3 hours on the home battery. It’s rather bad, especially considering that some films and serials may be watched for hours. The conclusion: it is not worth to save money on the device battery.

LOOKING BACK AT THE PRICE TAGS OF VIDEO GLASSES

In conclusion, let’s look at the price tags of the models mentioned in our text. Some of them have already quitted sale, others haven’t been put on our market yet. So, we will direct our attention to the average prices of world markets.

One should buy the video glasses orienting oneself by the functionality and keeping the price tag in mind. And … discussing them with Gadgets-reviews!